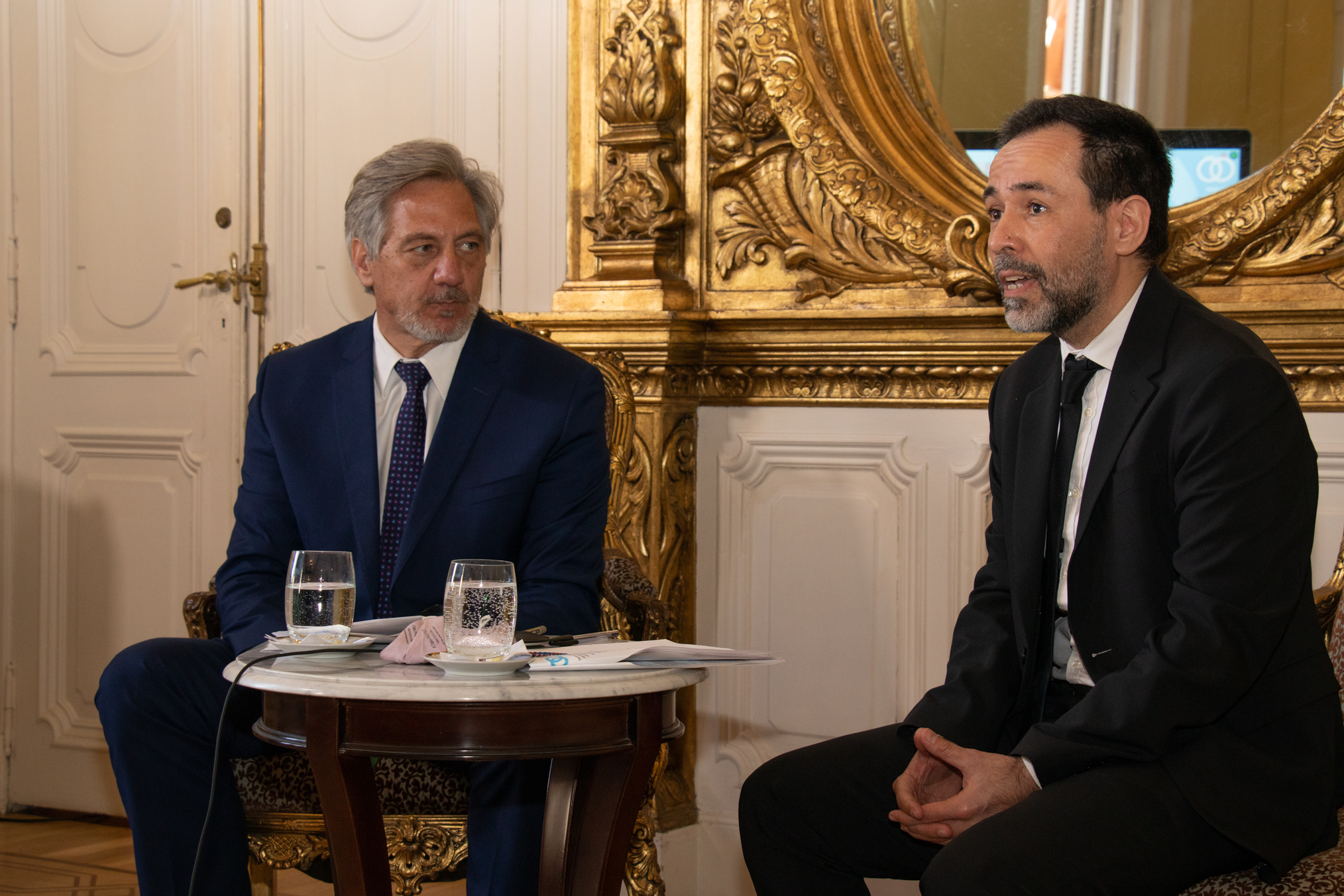 Creation of the Behavioral Sciences and Public Policies Unit

At the launch event, held on Tuesday, July 20, in the Hall of Scientists of the Casa Rosada, the President of the Nation Alberto Fernández, the Secretary for Strategic Affairs, Gustavo Béliz, and international experts in Behavioral Sciences spoke. In turn, the leading economist of the Division of Social Protection and Health of the IDB, Dr. Florencia López Boo, and Dr. Fernando Torrente, Director of the Institute of Neurosciences and Public Policies of the INECO Foundation, presented cases of successful interventions .

We are particularly pleased to announce that the INECO Foundation, together with the Inter-American Development Bank, participated in the launch event of the Behavioral Sciences and Public Policies Unit, an initiative of the Economic and Social Council that will function under the coordination of the Ministry of Foreign Affairs. Strategies of the Nation and in which the Foundation has been collaborating for its realization.

The aim of the Unit is to promote public policy projects based on studies of human behavior. The premise is to study how small changes in context can bring great benefits in people’s lives. Investigating how human beings make decisions – many times it is not in the rational way that we would like so much – can help to design public policies that are low-cost to implement and have a great impact on the well-being of the entire society.

The Behavioral Sciences and Public Policies Unit will be made up of a network of experts in various disciplines and will seek to articulate research with government programs.

Since 2018, the INECO Foundation has been working together with the IDB in a technical cooperation with the aim of promoting research in behavioral sciences throughout Latin America and developing policies that can positively impact people’s lives. The fact that this synergy has been crystallized into a state policy that generates interventions at a very low cost and with a very high impact in the medium and long term fills us with pride and puts us before a challenge: to continue developing research of the highest quality and deepen the dissemination tasks on the potential of these tools.

At the launch event, which took place on Tuesday, July 20 in the Hall of Scientists of the Casa Rosada and which featured international experts and the final phrases of President Alberto Fernández, Dr. Fernando Torrente, Scientific Director of the Cooperation and the Institute of Neurosciences and Public Policies expressed: “We are very honored to support this initiative because we believe that the creation of this Agency is a very important milestone for Argentina and will allow those of us who work in the behavioral sciences to articulate efforts to improve public policies. ”

Dr. Torrente spoke with Dr. Florencia López Boo, lead economist of the Social Protection and Health Division of the IDB and also director of Cooperation, and together they presented some success stories that have already been carried out in the country. One of the examples in which a small push, or “nudge” as they say in English, has been effective, is the intervention carried out with doctors from PAMI to reduce the prescription of a drug widely used to treat cognitive disorders but that lacks scientific evidence of its operation for this purpose. Simply by sending an email with updated information on the use of this drug and with a message comparing the prescription level of each doctor with his colleagues – what is called the “social norm” -, it was possible to reduce the rate of indication of this drug . In this way, a simple and low-cost intervention had an impact, not only on the health of the patients, but also on the economy of the health system.

Video projected on the day of the event in which Dr. Fernando Torrente explains the intervention and the randomized controlled trial carried out by the INECO Foundation together with PAMI and which was published in a very high impact scientific journal (if you want to know more about the research and see the published article you can continue reading here).

Gustavo Béliz, Secretary for Strategic Affairs of the Nation, was very enthusiastic about promoting the initiative from the Economic and Social Council and pointed out: “in general, behavioral sciences are very taken into account by politics when it comes time for a campaign. electoral: there is a lot of interest in the polls and in how the population reacts. However, there is little attention to these issues when it comes to designing public policies designed to have a better level of impact, refining them with a greater sense of humanity and personalization. ” In this sense, Béliz mentioned the importance of generating more humanized state interventions that take into account people’s emotions, perceptions, prejudices and cognitive biases. “This is possible today since we have an unsuspected amount of data that each of us generates daily from technology,” he added.

For his part, Iván Budassi, National Director of Strategic Analysis and who will be in charge of the Unit, said that when public policy is planned, it is always assumed that people act in a conscious, reflective, thoughtful way, that is, “we think that we think ”. The interesting thing that the Behavioral Sciences show is that although we sometimes do this type of thinking, perhaps most of the time we react in a different way: automatic, not so reflective or biased by some error. “Not only do these biases make us consistently err and they can be systematized, but they can also be studied and used to improve public policies,” said Budassi. And in turn he added that, although people all over the world have similar characteristics, there may be differences in habits and customs. Hence the importance of conducting local research and not directly applying studies carried out in other parts of the world with other idiosyncrasies.

Summary of the launch event of the Behavioral Sciences and Public Policies Unit held on Tuesday, July 20, in the Hall of Scientists of the Casa Rosada.

In the rest of the world there are already several countries that use behavioral sciences in formulating their policies. Since the UK launched the first human behavior insights unit in 2010, the Behavioral Insights Team, numerous governments including Denmark, Singapore, Canada, the United States, Australia and Peru have followed suit. During the event, Budassi spoke with Cass Sunstein, founder and director of the Behavioral Economics and Public Policy Program at Harvard Law School, advisor to the President of the United States Joseph Biden and one of the authors of the founding book “Nudge: improving decisions about health, wealth and happiness ”.

During the presentation, Cass Sunstein provided some examples of successful interventions – the preference to use clean energy even though it is more expensive in Switzerland and adherence to a free and healthy food program for boys and girls in schools in the United States – and detailed some of the cognitive biases that people have:

In addition, Sunstein introduced a novel concept that he called Sludge, literally “mud” in English, and which refers to all those bureaucratic barriers that citizens often have to cross to achieve a right or benefit that corresponds to them. “You have to carry out audits to know that” mud “and wage war on it. We have to remove all obstacles, remove behavioral barriers that separate humans from what they need, “he concluded.
Asked whether these behavioral science tools can be applied in developing countries or are only for rich countries, Sunstein’s response was categorical: “I would say that the most interesting work in the next 10 years with practical results they are going to be done in developing countries and I am absolutely expecting Argentina to be a leader in this matter. “
The launch event also featured the participation of psychologist David Halpern, CEO of the Behavioral Insights Team (BIT) of the United Kingdom, and one of the major references in Behavioral Sciences applied to Public Policy. Halpern told about the emergence of the BIT, the first Unit in the world to apply this type of approach: “In 2010 everything seemed like a great experiment, we did not know if it would work, we had a period of two years to evaluate if it was worth it. worth the investment. Fortunately and to our surprise we had a very strong impact on the British government that allowed us to continue to this day ”. In turn, David Halpern emphasized the importance of the work of the BIT with the outbreak of the pandemic, where understanding human behavior was key to be able to design policies that would help change people’s habits, such as promoting the use of chinstraps or maintaining social distance. “The importance of using a different perspective, a more realistic view of human behavior, was evidenced,” he concluded.
Finally, the launch event featured the words of the President of the Nation Alberto Fernández, who celebrated the creation of the Behavioral Sciences and Public Policy Unit and announced that a call will be opened to carry out studies in the national government and also the provincial and municipal governments. After explaining how in Criminal Law the historical idea of conceiving men and women as totally rational beings has been modified, he gave examples in which the study of behavior is already being applied. The President mentioned the project of clear and simple labeling of food that is being debated in Congress, the refund of VAT for beneficiaries of the AUH and the Egresar Plan, so that boys and girls finish secondary school. “What we want is to help people make better decisions for themselves and for the country: Design public policies tailored to the human being,” concluded the President.
prev post